I’ve been craving a new cookbook for months. I’ve exhausted all the recipes on my shelf and I’m practically itching for a shiny new tome to start cooking my way through. But my cookbook shelf is full to capacity and my neurotic need to keep all my books in one place has so far trumped my craving to expand the collection. Plus, there are a few books of my dad’s that have been woefully neglected over the years. And so, I’m dusting them off and finding all the new-to-me recipes that I’ve been ignoring for too long. END_OF_DOCUMENT_TOKEN_TO_BE_REPLACED 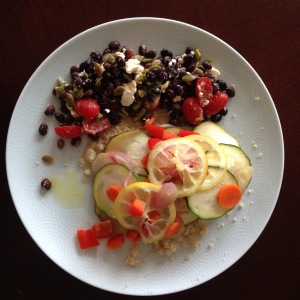 Every morning on my walk to work I pass the gardener for The Farnsboro condominium building. He is meticulous; raking every last leaf out from between the hydrangeas, pruning each plant to perfection, arranging mulch like Tibetan monks creating sand mandalas. Everyday we exchange pleasantries, and everyday I secretly wish I could stop and play in the dirt and soak up his green thumb secrets. Despite the summers I spent on the farm, I am not nearly the horticulturist I should be. It’s not that I kill every plant I touch, I just haven’t kept every plant alive. END_OF_DOCUMENT_TOKEN_TO_BE_REPLACED

Campus has been preparing for weeks. Every last bit of wrought iron got a fresh coat of shiny black paint – gates, railings, lamp posts, and barriers. The wilting tulips were pulled and replaced with rows of bright red petunias. Fresh sod was laid, windows washed, floors were waxed. And then the final touches – stages built, tents erected, and a sea of chairs spread across Healy Lawn. Golf carts buzzed everywhere, filled with stanchions and water, boxes of programs and signage.  It’s graduation time and it’s a beautiful thing. END_OF_DOCUMENT_TOKEN_TO_BE_REPLACED 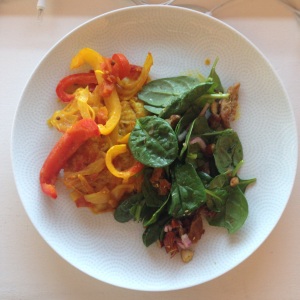 We had a bit of a mishap at the Krauss residence last week. Or rather, our entire building had a really major mishap. The previous Saturday morning, our water heater decided to die. Like all of us, the winter did our poor little water boiler in, which meant that we spent the rest of the week without a drop of hot water. Hand-washing dishes in freezing cold water left a sheen of grease over every pot, pan, utensil, and plate. My icicle fingers took a good hour to thaw. Clothes came out of the machine half-clean. And my morning shower turned into a lesson in 18th century hygiene. By the end of the week, I had it down to a science: 1. Run an inch of cold water in the tub. 2. Boil two pots of water on the stove. 3. Carry carefully to bathroom to avoid pouring on naked toes. 4. Add to water in tub. 5. Get in immediately. It will be warm for five minutes. 6. Don’t bother pretending that your hair and body aren’t covered in a layer of soap scum. 7. Embrace it. END_OF_DOCUMENT_TOKEN_TO_BE_REPLACED

I’m just going to go ahead and say it. 2015 is already better than 2014. These 7 days put the previous 365 days to shame. We spent New Year’s Eve in a surging hoard of Germans, all pressing toward the stage in front of the Brandenburg Gate, where David Hasselhoff (yes, that David Hasselhoff) was performing, just like he did 25 years ago shortly after the fall of the wall. Did you know that Germans have an unhealthy obsession with this man and his music? Did you even know he made music? Neither did I, but I found out the hard way. Thankfully, the musical portion of the evening lands squarely in the middle of the large hole in my memory that begins with a cup of hot mulled wine in on a crowded street and ends with watching Baywatch on Erin and Oliver’s couch sometime in the wee hours of the morning. END_OF_DOCUMENT_TOKEN_TO_BE_REPLACED

It’s been a long time since I wrote about running. This is mostly because I haven’t been doing very much of it. It’s amazing how quickly one gets used to sleeping in a little later on weekdays and a lot later on the weekends, staying in pajamas half the day. Eventually though, the itch creeps in from somewhere. I can never find the source and I can never stop it’s persistent pressure on my weak will. And so, on Saturday morning just after 7am, I found myself ticking off the mile markers on the C&O Canal Trail, watching the early morning sun slowly escape the horizon. It was a perfect day. Between thin skins of ice, the canal water was quiet and smooth as glass, with a reflection so clear and real, I felt that if I dove in head-first, I might be standing right-side up in the upside-down world beneath the surface. There were cardinals, in pairs, the bright red male and his muted brown mate, hopping about in the dust and darting through the barren brush. The cold air bit the lungs in a way that shook one awake and brought on an animal alertness. The cold also brings a certain sharpness and clarity to the air. The outline of the rising moon was cut so cleanly against the rosy sky, I felt that I could pluck it out of the air, as if it were a piece of construction paper in a shoe box diorama. Clearly, I was smitten, all over again. END_OF_DOCUMENT_TOKEN_TO_BE_REPLACED