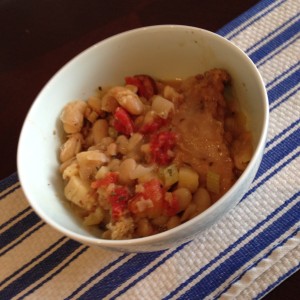 Matt and I honeymooned in France. We spent the first half of our trip exploring Normandy, including the beaches, cemeteries, and museums that commemorate the soldiers who lost their lives on D-Day. Romantic, no? Well, for us, it was pretty perfect. (Kind of like when we went to Hawaii and spent 5% of our time at the beach and 95% of our time learning about the history and culture of the island.) Lest you think we spent our whole honeymoon entrenched in the study of death and war, don’t worry. We also saw Mount Saint-Michel when the water was high, which was something straight out of a fairy tale. A tiny turreted village with a monastery perched atop and a labyrinth of alleys and doorways weaving their way toward the summit. We explored the Loire valley, touring the chateaux and drinking local wine, and ended in Pairs. Ah, Paris. It was beautiful, perfectly beautiful.

You might wonder why I’m waxing poetic about our honeymoon. It’s not our anniversary, it’s not a special occasion, but thanks to Matt, I have a constant reminder of out time in France. It’s a present he gave me for our second wedding anniversary and it’s the best present. Ever. It wasn’t expensive. It’s not valuable, but I definitely cried a bit when I opened it. It’s a counted cross-stitch kit of a flower shop in Paris. Matt had to explain it to me. “The traditional second year anniversary gift iscotton and I know you like needlepoint and I know you like flowers and it’s in Paris, like our honeymoon.” Awwww. Romantic, no? I told you it was the best present ever.

After several hours of needlepoint last weekend, I was pining for France, and decided that a big pot of cassoulet was exactly what we needed. Garlicky bread crumbs, creamy white beans, and slow braised chicken thighs. If I closed my eyes, we could have been in our hotel room in Paris, newly-wed and happy as clams.

In a large skillet, heat 1 tbsp of oil and add the onions, parsnips and celery. Sauté for 3 minutes until glossy and translucent. Add the minced garlic and stir into the mixture before transferring it all to your slow cooker.

Heat the remaining 1 tbsp of oil in the same skillet that you cooked the onion mixture in. Season the chicken with salt and pepper and sauté for 2 minutes on each side until lightly browned.

Tuck the browned chicken pieces into the bean mixture in your slow cooker along with the kielbasa or sausage.

To make the breadcrumbs put the bread into a blender and pulse until they resemble a crumbly texture. Spray a skillet with non stick olive oil spray. Over a medium heat add the breadcrumbs and move around the pan for a minute or two until golden brown. Ellie suggests these can be stored in an airtight container for 2 weeks.

Remove the cover of your slow cooker and sprinkle the toasted breadcrumbs over the top of the cassoulet.

[My note: I cooked my cassoulet in a Dutch oven on the stovetop and moved it to a 350 degree oven after I added the chicken and sausage.]