The curse has been lifted. Yesterday at 3:30pm, I removed a perfectly risen, golden round of Pain de Campagne from the oven. I’m not going to say it was a miracle, but I was definitely praying to the bread gods throughout the whole process. The first time the bread rose, I laughed and teared up at the same time. The second time the bread rose, I walked the bowl into Matt’s office and shoved it under his chin. “Look! My dough doubled in size!!” By the time I shaped the twice risen dough into European-inspired rounds and placed them on cornmeal dusted baking sheets, I was downright giddy with anticipation, but also terribly anxious. With everything going so well, the probability of something going terribly wrong was increasing by the second. 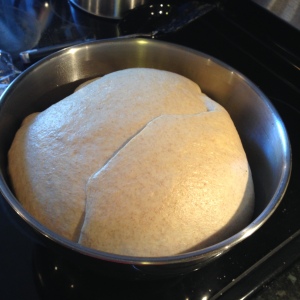 Meanwhile, on the stove, I was experimenting with a new soup. We were having dinner guests, and as usual, I decided to use our innocent friends as guinea pigs. It was a cold day in Washington – in the thirties for the first time this season. I loved it. I barely left the house. Hell, I barely left the the kitchen, which – with the oven on and the pot bubbling on the stove – was a balmy seventy five degrees. Hearty soup is always the first thing I turn to when the weather gets cold. When winter hit Boston, my dad used to cook up a pot of Portuguese Kale Soup, studded with sausage, white beans, potatoes, and lots of leafy, dark kale. It was one of my favorite weeknight meals and I started to look forward to it as soon as the leaves started to fall. This soup felt like an homage my dad’s, dense with freekeh, meatballs, and aromatic spices, it was homey and filling and begging for a piece of crusty, fresh-baked bread to sop up the broth from the bottom of the bowl.

When I went to slice into my loaf of bread, I half-expected it to deflate, but the crust put up a fight and the center practically melted under the blade. And it tasted like bread! Slightly sour, a little chewy with a crunchy crust. It wasn’t perfect, but it was far beyond my highest expectations given my troubled bread baking past. Waking up this morning to a slice of my very own toast was exceptionally satisfying and I am already itching to bake the next loaf. This might be the start of a bread-baking obsession.

Pain de Campagne from The Modern Baker by Nick Malgieri

1. To make the first dough, combine the water and flour in the cowl of an electric mixer. Use a large rubber spatula to stir them together. Place the bowl on the mixer with the paddle and beat the dough on the lowest speed, stopping and scraping down the bowl and beater a couple of times while the dough is mixing, until the dough is elastic and clings around the paddle, 3 to 4 minutes. Remove the bowl from the mixer, remove the paddle, and cover the dough with plastic wrap. Let the dough rest for 1 hour.

2. To make the second dough, place the flour and salt in a large mixing bowl and stir well to combine. In a separate bowl, whisk the yeast into the water. Use a large rubber spatula to stir the yeast liquid into the flour and salt. Continue stirring until the dough is evenly moistened, but it will not be particularly smooth – this doesn’t matter at this point. Cover the bowl with plastic wrap and set aside until the first dough is finished resting. It will begin rising while it’s resting.

3. An hour after setting the first dough to rest, scrape the second dough over it in the mixer bowl. Use a large rubber spatula to mix the two doughs together as well as possible.

4. Place the bowl on the mixer with the dough hook and mix on low speed just until the two doughs are thoroughly combined, about 2 minutes. Stop the mixer and let the dough rest for 15 minutes.

5. Start the mixer again on low speed and mix the dough until it becomes smooth and elastic, about 2 minutes.

6. Scrape the dough from the mixer bowl into an oiled mixing bowl and turn the dough over so that the top is oiled. Cover the bowl with a towel or plastic wrap and allow the dough to rise until it is very aerated and more than doubled in bulk, about 2 hours.

7. Scrape the dough out to a floured work surface and fold it over on itself several times. Return it to a freshly oiled bowl and turn it so that the top is oiled. Cover again and let the dough rest for 1 hour.

8. Scrape the dough onto a lightly floured work surface. Use a bench scraper or a knife to divide the dough into 2 equal pieces.

9. Cup both hands around one of the pieces of dough, pushing inward at the bottom and rotating the dough in your hands to make it round and to pull all the uneven edges of the dough underneath the sphere of dough you are forming. Repeat with the second piece of dough. Cover the round loaves with a towel and let them rest for 10 minutes.

10. After the dough has rested, gently repeat the rounding, making sure the loaves are perfectly even spheres.

11. Place one ball of dough (boule) on each of the 2 baking pans and cover them with towels. Let them rise until they have doubled in bulk, 1 to 2 hours.

12. About 20 minutes before the boules are fully risen, set racks in the upper and lower thirds of the oven and preheat to 400 degrees. Use a single-edge razor to slash 5 lines on the top of each boule, spacing them equidistant and holding the blade perpendicular to the loaf. Be careful to slash just the top skin of the dough. Repeat with 5 more lines diagonal to the first ones.

13. Bake the boules for about 15 minutes, then switch the pan in the lower third of the oven to the upper third and vice versa, turning each pan from back to front at the same time. Continue baking until they are well risen, deep golden, and feel firm to the touch, 15 to 20 minutes longer. Slide the baked boules to racks to cool.