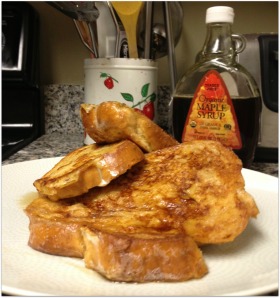 For someone who takes so much pleasure in cooking, it’s curious that breakfast, a meal which often requires no cooking at all, has long been my favorite meal of the day. Perhaps it’s fasting through the night that makes breakfast so satisfying. Or maybe it’s because it’s acceptable to eat nothing but sugary, sweet foods and call it a meal. Regardless, breakfast is quite simply the best.

As a young child, my mother was usually responsible for preparing my breakfast. She made me cream of wheat with a spiral of raspberry jam drawn on top or french toast slathered in syrup or blueberry pancakes with the fresh berries we picked at the local farm. When I began making my own breakfast, the quality dropped substantially, an Eggo waffle on my walk to school, or a bowl of cereal wolfed down at the kitchen table. Still, I always eagerly anticipated the first bite of food of the day, even when it came out of a plastic sleeve.

Some of my favorite breakfasts were on Sundays when my grandparents visited. There were usually 3 courses, beginning with half a grapefruit or a wedge of melon depending on the season, then a bowl of cereal, and finally toast or bagels or bialys with a platter of smoked or cured fish,  lox, white fish, pickled herring, and mackerel. These were multi-hour feasts, accompanied by the Today Show, the Sunday paper, and my grandmother’s stack of half-worked crossword puzzles.

My other favorite breakfasts were when my dad was in charge, usually when we were at the lake house in Maine. He once clipped a recipe from the Boston Globe for smoked trout hash, which quickly became our favorite weekend breakfast. Tiny cubes of potatoes, chopped fish, bits of onion, and herbs fried in a pan until a golden brown crust formed across the bottom. Meanwhile, he would poach eggs, cursing loudly when the water boiled too fast and tore the whites apart. He eventually bought these funny little footed spoons with a long stem attached that the eggs rested in while they cooked. This gadget dramatically improved the whole experience.

This morning I am eating none of these things, just a humble bowl of yogurt with berries and walnuts, and yet the mere thought of this meal pulled me from our comfortable bed like a moth to a flame. My dad was similarly summoned to the start of his day, by a breakfast favorite of his own. While travelling in Italy for their 20th wedding anniversary, my dad discovered the joy of toast cooked under the broiler with a pungent cheese and a drizzle of honey. When they returned, this simple slice of bread became a staple of his. I remember walking into the kitchen to find him hovering over the toaster oven waiting for just the right amount of golden brown bubbles to rise to the surface, so that he could begin his day with that first bite of food perfection. Like father, like daughter.